“If the present growth trends in world population, industrialization, pollution, food production, and resource depletion continue unchanged, the limits to growth on this planet will be reached sometime within the next one hundred years. The most probable result will be a rather sudden and uncontrollable decline in both population and industrial capacity”, concluded in 1972 the report The Limits to Growth, published by the Club of Rome.
This global think tank was the first to use computer simulation analyzing exponential economic and population growth versus finite resource supplies. The original version presented a model based on five variables: world population, industrialization, pollution, food production and resources depletion. These variables are considered to grow exponentially, while the ability of technology to increase resources availability is only linear. So the 1970’s would know the environmental movement.
Since corrosion has a direct impact in pollution, it was about the same time that the first evaluation of the cost of corrosion was conducted. The Hoar Report revealed that 3% to 4% of the GDP of industrialized countries is lost annually to corrosion. All similar evaluations performed later by different organizations basically came to the same conclusion. But the Hoar Report already emphasized that 25% of the annual cost of corrosion could be saved just by applying existing knowledge on corrosion control.
R&D efforts
The World Corrosion Organization published a whitepaper in 2009 (Dissemination, Research, and Development in Materials Deterioration and Corrosion Control) that concludes:
“To satisfy the basic needs of the 6.3 billion people on this globe, including proper nutrition, clean water, good health, safe housing, dependable energy, effective communication, and mobility, many technological changes with global dimensions must be accomplished. While this concept is widely appreciated as such, there is often only a limited awareness of how critical it is to solve corrosion problems and what the real implications are to society”.
The intention of the study was to demonstrate with several examples that future technological challenges can only be met by “immense R&D efforts worldwide in the fields of materials, surface protection, corrosion control, and condition-based monitoring”.
“It appears that in literally all cases, key problems related to materials degradation and corrosion must be solved. This involves materials stability under new environmental conditions or functional adjustment of environments and materials surface properties by appropriate surface modification methods. This work must include efficient management of corrosion mitigation and service integrity. Condition-based monitoring will be one of the key factors to ensure service integrity. However, this can only be accomplished with innovative sensor devices that have yet to be developed. Global standards should be established to foster condition-based monitoring as a standard procedure”, stated the document.
Maintenance and corrosion management systems 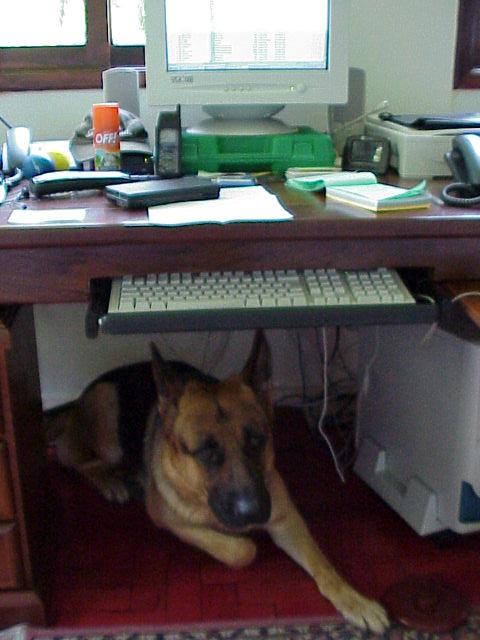 Despite the Digital Revolution and its growing popularity from the 1970’s, it was only in the beginning of the 1990’s that computers starter to be used to maintenance and corrosion management. Until that time, all the information of critical facilities, like ships or offshore platforms, was kept in papers that used to be spread in lots of piles when any repair must have been done.
“Then we were forced to follow blindly the price of shipyards without any control”, remember Duperron Marangon, naval engineer and consultant for Brazilian mining company Vale at that time, for the maintenance of its ships (the picture shows his office at the beginning of the 1990’s). It was a huge and non-intelligent work, so, he decided to develop a finite element calculator associated to digital spreadsheets that showed up to be much more efficient.
Ships are the largest steel structures produced by man. They go through a continuous process of maintaining their structures and equipment and, every five years, on average, need to stop in shipyards for structural repairs. Due to the aging fleet and the increasing environmental concerns, it has become essential to exercise better control over the maintenance of ships. Thus, they were natural candidates for carrying out validation tests of a maintenance management software.
CMMS
Today, a software like this is known as Computerized Maintenance Management System (CMMS). It is supposed to streamline the maintenance management of great responsibility structures, where failure may cause major damage, pollution and deaths, such as ships, oil platforms, bridges, aircrafts, industrial parks, minimizing the risk of accidents. The most advanced ones reproduces the 3D structures to simulate degradation over time, which results in a 4D perspective.
A software capable of performing intelligent maintenance management needs to have a graphical interface, because structures do not have identification numbers, as do the equipments, with each piece being recognized by a unique code. Even if each part of a structure is numbered in the construction project, the repair will occur in order to produce new regions, which can be inserted into the original or extend for many of them. The lack of this part number also prevents the use of the internet for the execution of quotations, since the shape of the repair and the region where it is located has a direct influence on the cost of implementation. The location, especially in large structures, has implications for the number of scaffoldings needed to perform the work.
The capability of knowledge management should be emphasized as well, because gathering information in a single database allows faster access, data security and consequent increased productivity. If you are interested in integrating the results with your ERP or other existing system, it must is also be possible. Otherwise, you will remain at Stone Age and information will just be dispersed in a very large number of plans, sketches and paper reports. Humanity is still not sure about the limits to growth in a planetary scale, but at least for corrosion management, as the music says, “the future has arrived”.

Warning: You're Losing Money by Not Using Corrosion Prevention

THAT PART OF PHDC4D® DEVELOPMENT HAS BEEN FINANCED BY PROJECTS IN PARTNERSHIP...
Scroll to top